On our last day in Scotland we had mountain bikes booked for the afternoon but no fixed plans for the morning so we made the decision to head towards Glencoe. Our first stop was to walk around the area of Signal Rock. This easy route went up to Signal Rock itself which was an old druid sun rock and used later by a clan to look for imminent attack. Clearly since those times the surrounding vegetation must have grown as there was not much of a view from the top, we could just see foliage. The walk then took us through the forest, undulating up and down a couple of times until we completed the loop back at the car park. It was a pleasant little stroll that had a couple of hills and some muddy patches but in terms of views and scenery it pales into insignificance compared to other trails in the area.

Our next stop was at the Three Sisters. This is an impressive panorama that can be witnessed from the main road in towards Fort William (from Glasgow). I wish we had time to go on a hike here as the scenery was stunning but unfortunately the trails are longer and we had plans so we had to content ourselves with taking a few pictures then driving back towards the Nevis Range. 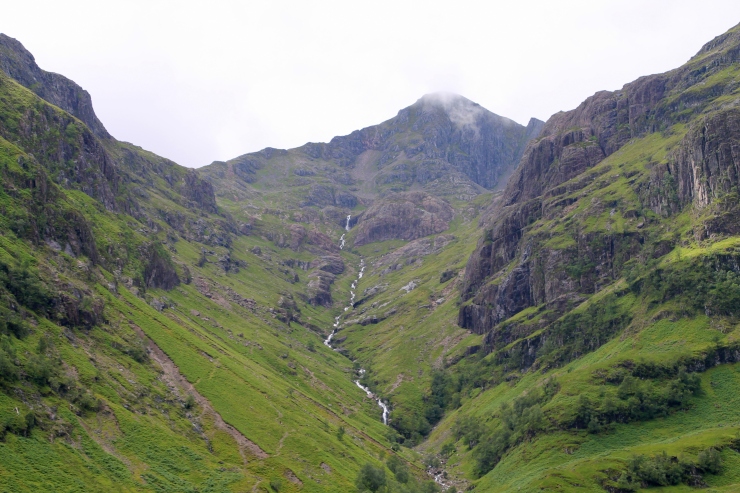 We had mountain bikes hired for the afternoon from the Nevis Bike School located next to the Aonarch Moor gondola station. For any experienced cyclists you can catch the gondola up the mountain to hit the red or competition run. Having watched footage of people going down them on Youtube we decided it was beyond our novice skills so we had to ride the green and blue run with a loop trail down the valley between the two. This meant we needed to cycle up the hills first which was a complete nightmare for me resulting in me having to get off and push a few times when I actually ceased making any forwards progress. Once at the top we could let loose through the forest at which point it was my mum’s time to struggle as she pushed on any of the steeper bits or tight turns. Although not technically difficult the routes we did were great fun for beginners and I really enjoyed myself trying out a new sport. I would definitely love to have another go but need to look into places where there are easier trails from the top of a lift or road.

We then went back to our apartment, stopping when we spotted some highland cows to take some snaps of them, to pack ready for the drive down to Northumberland where we would be spending the last weekend of our trip.

Are you a mountain biker? Any favourite places to try it out around the world? Have you hiked around the Three Sisters area of Glencoe?