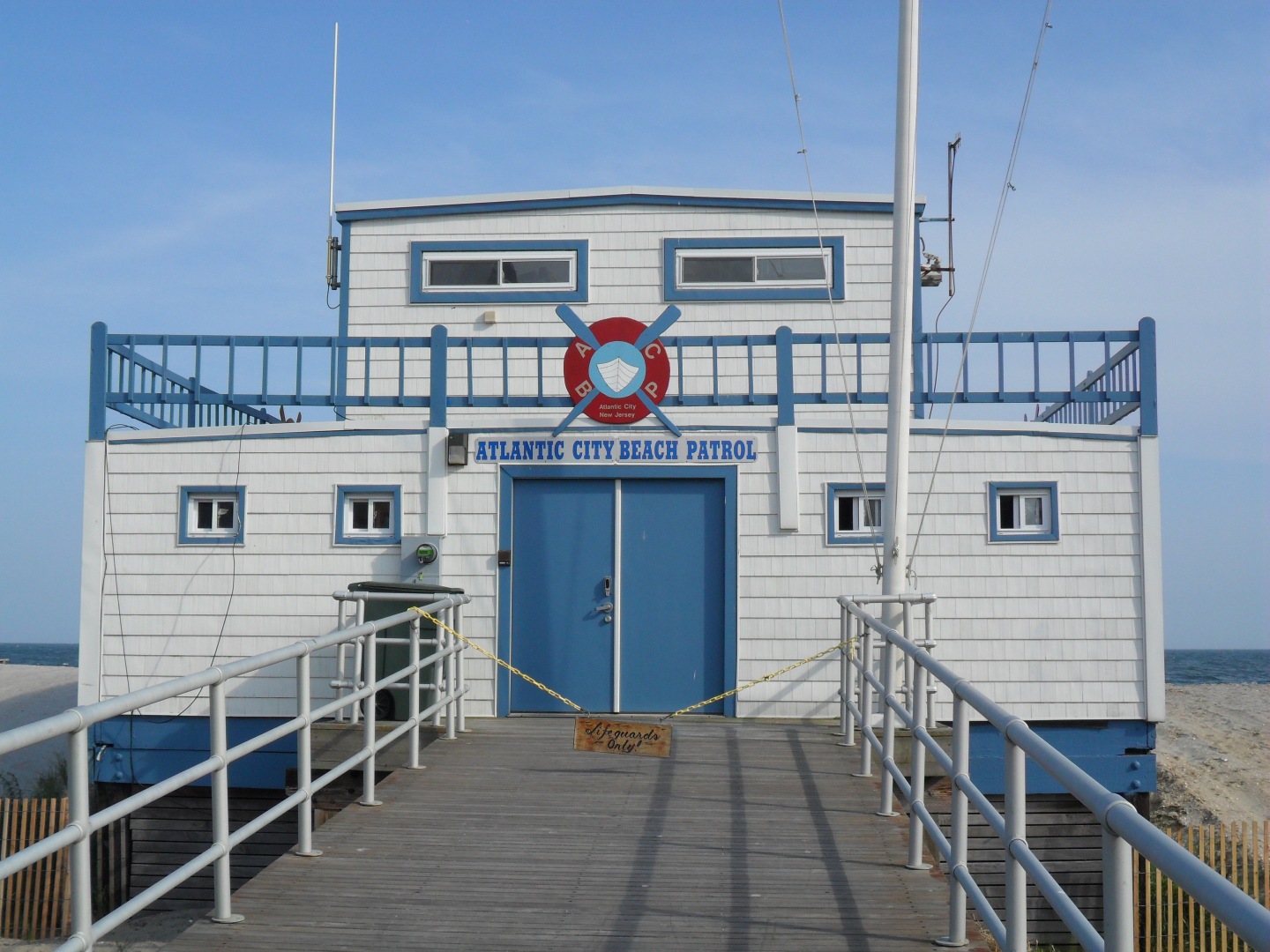 Thursday we walked up towards Central Park. The NYP entitled us to 3 hours bike rental from Central Park bike tours so we found the pick up point and then set off to explore the park. This was a great way to see a wide area of the park, we made it all the way to the Harlem end and back within the 3 hours with stop offs along the way. If you want to go into the park to see actual features you have to be willing to either get off and push the bike or hire a bike lock as you are unable to cycle on the paths (road cycling only). For those worried about fitness levels there is a hill- the Great Hill- down at the Harlem end (you can bypass this if you want) but the rest of the route has only gentle slopes so the going is not too tough. This has now overtaken the High Line as my favourite activity, well worth taking the time to do it. 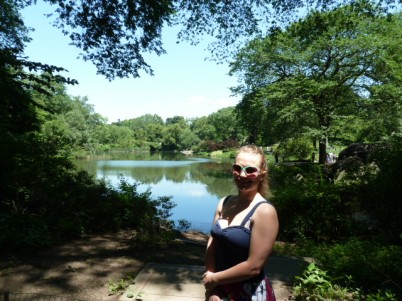 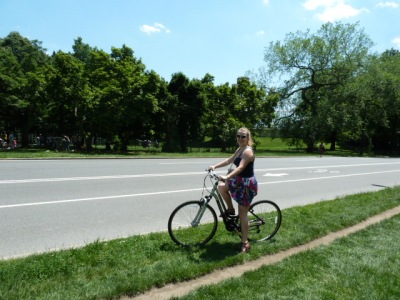 On our way around the park we stopped off to relax in the sun, see the Great Lawn which was covered in sunbathers and to see Strawberry Fields which is where the John Lennon “Imagine” memorial mosaic is situated.

Following our cycling we walked up the west side of the park to the American Museum of Natural History. There are exhibits covering humans, animals and space. My personal favourite, as is the case with all natural history museums, were the dinosaur rooms and the extinct animals. 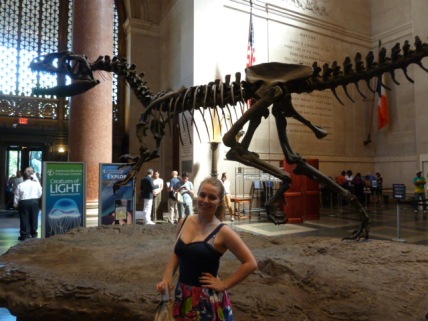 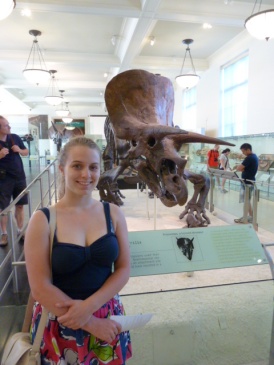 We then had to leave the days activities to go and change rooms in the hotel. Our next room was much nicer than the previous room as it felt less claustrophobic but was still inferior compared to the rooms in the other two hotels further highlighting the fact you definitely pay the price for staying on Manhattan rather than just off the island.

Friday was quite an early start by our standards to allow us to get to Port Authority Bus Terminal where we got a bus from Stand 1 out to Atlantic City famous for its boardwalk, casinos and apparently Jersey Shore. The journey took around 2 and a half hours and dropped us off at the Atlantic Casino. The bus company provided us with a $30 free bet for the casino so after a quick breakfast we went down into the casino room. Neither of us were particularly bothered by gambling so we hit the slot machine rather than going to a games table. After retrieving my $90 winnings- yay for beginners luck- we left the casino.

We picked the direction that looked as though there was the most going on and started by walking along the beach and in true British style couldn’t resist dipping our feet in the sea before deciding it was too cold and sticking to the sand. This was unfortunately not the most comfortable experience due to the hundreds of bits of cracked shell everywhere in the sand. 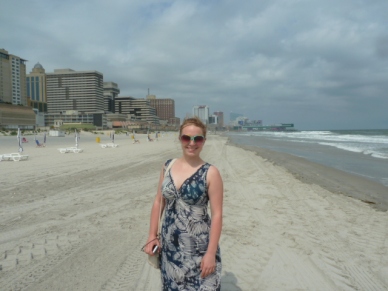 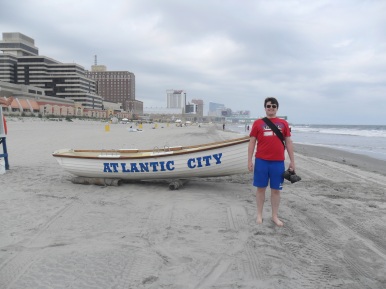 Returning to the boardwalk we carried on in the same direction. The boardwalk is vast, it goes on beyond the field of vision in both directions. We stopped off on a pier with a high end shopping mall on it which has a fountain display at the far end. 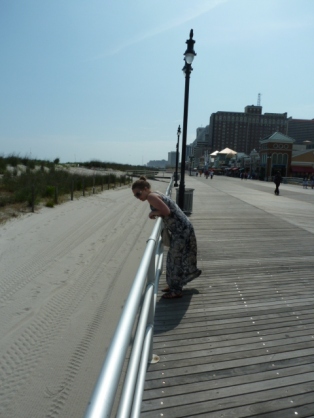 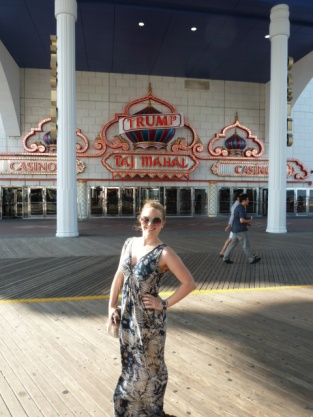 Back outside the city reminded me of a mix of Las Vegas with its over-the-top casinos and Blackpool with small shops selling tacky souvenirs and beach merchandise. Slightly further along we came across the Korean War Memorial which had a video giving information about the war and a tribute to the 4 local men who had won the Medal of Honor during the conflict. 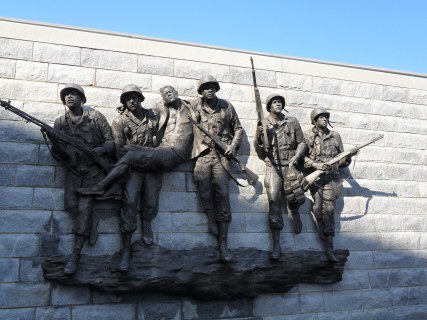 As we got yet further along we came across a great crowd of people who were setting up for a street, well boardwalk, parade (we still have no idea what the occasion was) so we got milkshakes and settled down to watch it. The whole thing was stereo-typically what you would imagine when you think of an American parade with floats and marching bands- nothing like anything we ever do in England. There was a brilliant atmosphere despite the weather closing in and it was an experience for us both. 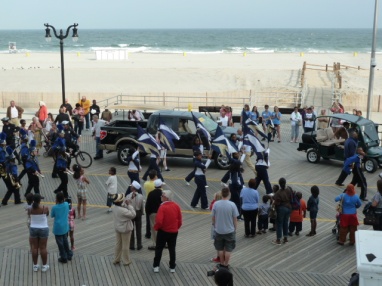 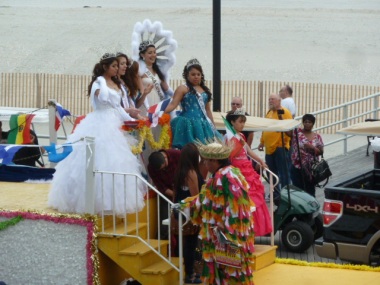 We arrived back in Manhattan late that night and so headed straight to bed.