For our second full day in Coron we had booked the Ultimate Island Tour with a local agency we had found whilst wondering around Coron Town. Unlike the choice given for island hopping in El Nido, most tours in Coron follow a similar route albeit in a slightly different order to prevent everyone turning up in the same place at the same time. That being said, some of the spots were still quite busy despite the staggered arrivals. 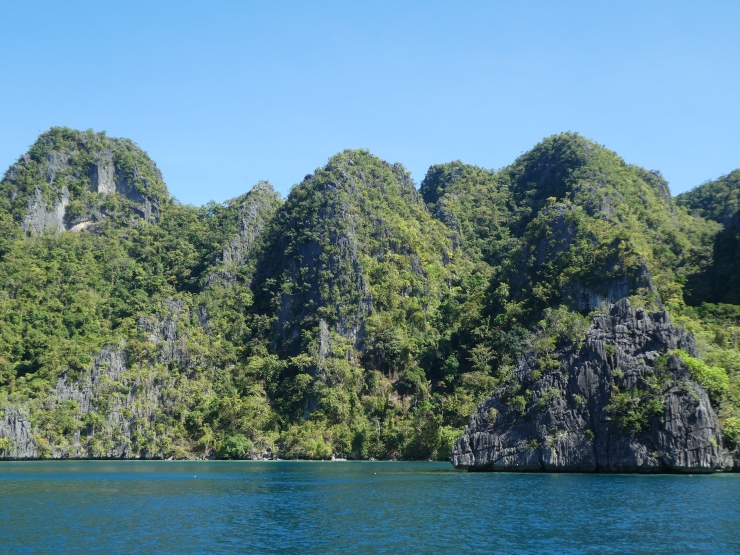 On our boat we first stopped near CYC beach for a snorkel just off the shore. There was the option to swim actually onto the beach but it was fairly full of people and was just a strip of sand, underwater seemed the more interesting option. The coral here wasn’t the best quality, much of appeared bleached which is heartbreaking to see and meant there wasn’t that much in the way of marine life around. What was even more upsetting was that despite the already evident death of the coral some people were still insisting on touching and standing on it, I think some were not strong swimmers so just wanted to put their feet down but this is only worsening the problem and really needs to be addressed. 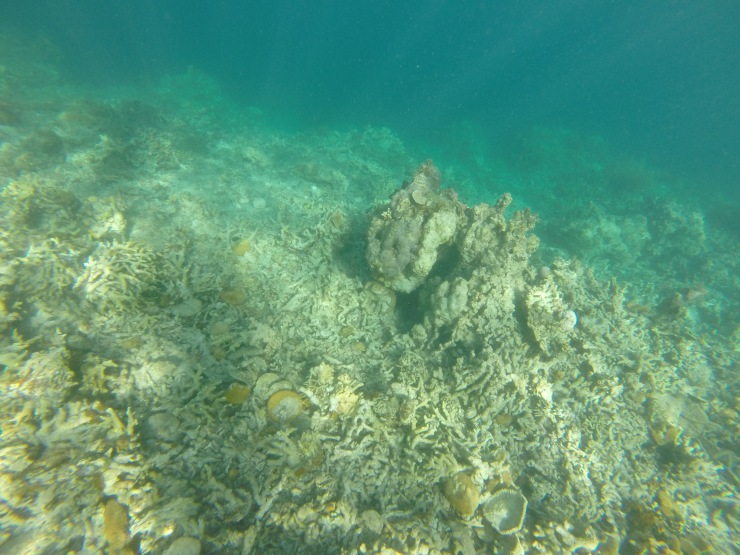 We then moved on to the Skeleton Wreck which was really cool to see. As I have never been diving, I have never come across a shipwreck before however this one is shallow enough that even snorkelers can get a glimpse of it. The water was quite dark the day we were there in this sport but this added to the ambience and gloom of the sunken Japanese ship. There was also a coral garden nearby that we were able to snorkel around. The reef here was in marginally better condition than near CYC beach but there was still pretty widespread bleaching and destruction. What was fun to see though was a shoal of fish all swimming in synchronicity just off the edge of the coral shelf. 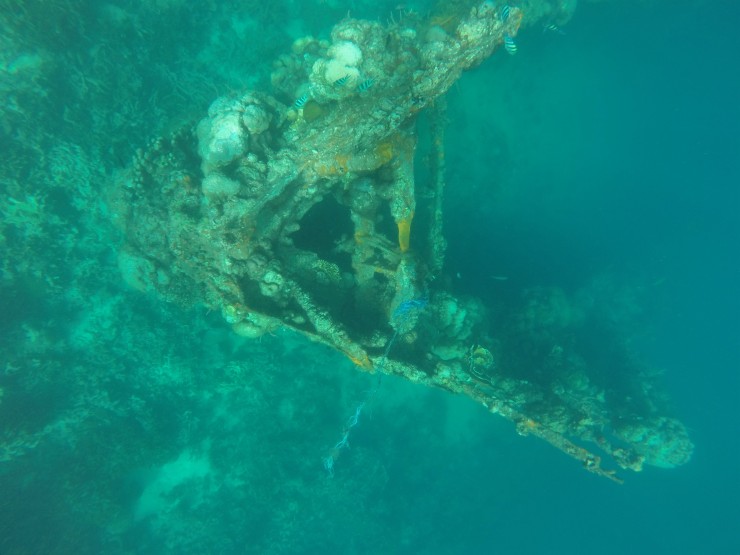 At this point it was time to find a beach spot for lunch. The tour company you go with will determine which beach is selected but all of them in the area have white sand beached and aquamarine waters creating a handsome backdrop for your meal  and providing an area to soak up the sun whilst the food is being laid out on the table. Lunch is served in a wooden shelter and for our tour was an absolute feast.

Following lunch we arrived at the Twin Lagoons, one of the most famous picture spots in the Philippines. As suggested in the name it features 2 lagoons on either side of a limestone cliff. When we arrived the tide was low enough for us to be able to swim under the cliff from one side to the other but for other times when the tide is higher there is a ladder you can climb over although I can imagine this is pretty intense when the area is more crowded. It is a fair swim to get across the first lagoon to reach the second one and it was clear some of the weaker swimmers on the boat struggled to make it across and had to be pulled by the lifejackets by the crew. This site is no doubt gorgeous however the sheer number of people there was overwhelming at times, if you can get a private boat and go early before all the tour groups arrive then I would definitely recommend doing that.

Once we had finished at the Twin Lagoons we set off and docked at the jetty for Kayangan Lake. This is the only dry landing of the trip and from here you have to climb over the top of the mountain to reach your destination up approximately 300 steps. At the top is one of the most photographed places in the Philippines, not actually of the lake but instead looking back over the boat docking area, which is absolutely stunning but this means it came with a queue of people waiting to take “that” picture (100% worth it though). We then continued down to the lake itself. The water here is 70% freshwater and 30% salt water and we were told that here it was essential to wear our life jackets. There are jagged rock formations under the surface especially around the edge by the side walk which adds some interest to the underwater vista. The pull here though is more the beautiful views above the water which were just wonderful. 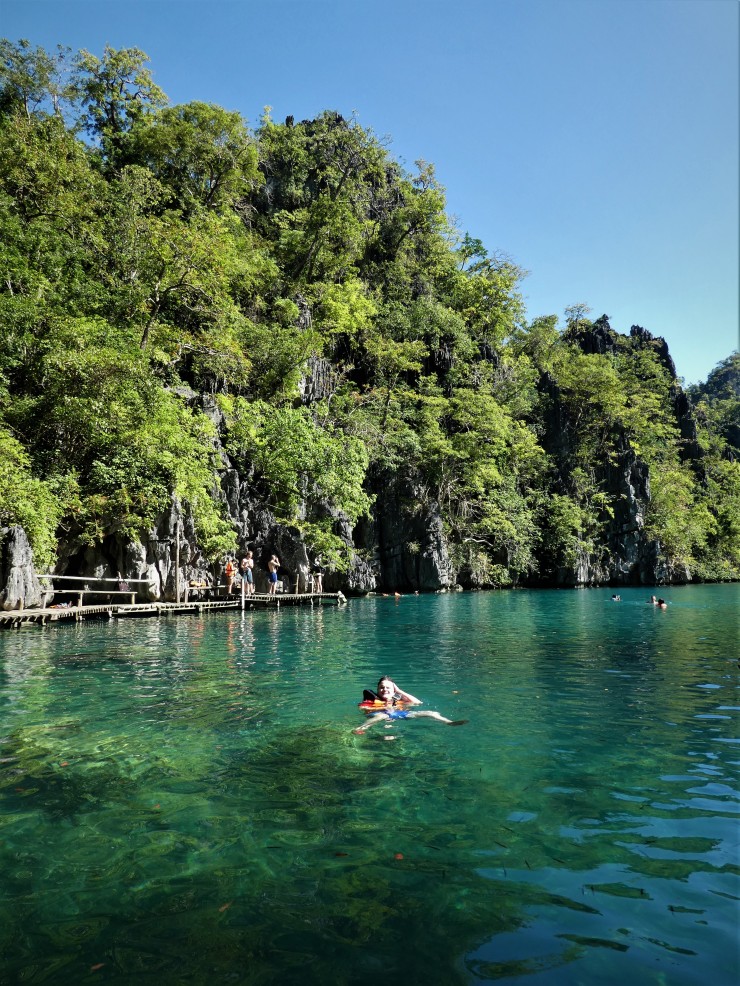 After climbing back over the top to our boat we set off for our last stop of the day, Siete Pecados Marine Park. This was another snorkelling spot and again the coral here had seen some destruction however there were a few more fish than some of the other stops and there was an area of grasses that was full of huge starfish which I enjoyed. The current around here is stronger than any of the other areas so the weaker swimmers had to stay near the boat but going further afield paid off just for the starfish.

We then docked back in Coron Town and watched the sunset from our hotel before grabbing a bite for dinner and then hitting the sack.

The Coron Ultimate Island Tour is a great way to see the islands and areas around Coron Town on a budget however the amount of damage done to most of the coral (which was similar to that in El Nido) was upsetting. Although we did see some nice stuff underwater, and the ship wreck was great, that side of things was more disappointing. That being said, the over water stuff (Twin Lagoon, lunch on the beach, Kayangan Lake) were all amazing and completely made up for it. I would suggest if you can afford it getting a private boat that allows you more time at these points and perhaps takes you to coral more off the beaten track that may not be as damaged by throngs of tourists some of whom seem to treat it with complete disrespect. Overall though I loved our day island hopping around Coron and would highly recommend visiting the area.

Have you got any recommendations of places around the world that still have coral in good condition? Have you ever been anywhere with views to rival Coron?