The next stop on our tour was Seville, the capital of Andalusia. We stayed in the Apartmentos Bib Rambla here which are self catering apartments outside the centre. It is a bus trip into the city. The apartments themselves were OK although until we went out and bought some bug spray we did have a bit of an ant problem which culminated in me having to empty and shake out my whole suitcase. The other inhabitants of the apartments seemed quite noisy through the night as well.

On our first afternoon in Seville we went down to the Parque Maria Luisa to the Plaza De Espana. This plaza is magnificent; brightly coloured with bridges crossing what is almost a moat. Being truly touristy we hired a rowing boat and paddled around the water stopping at various photo opportunities. The rest of the park is very relaxing and filled with gardens, water features and pretty buildings. It is also filled with cyclists and runners that you have to avoid. 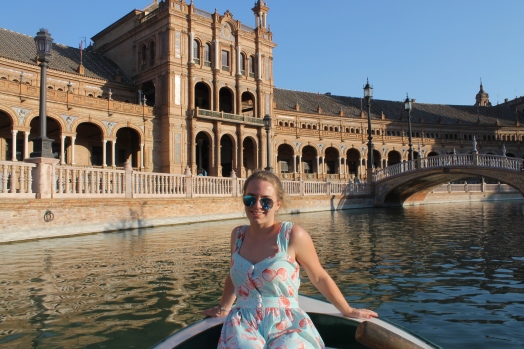 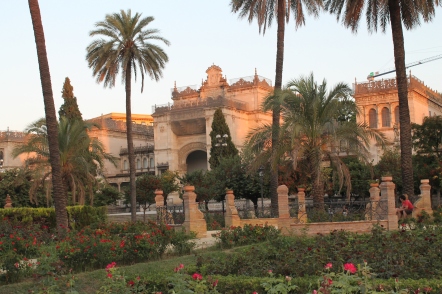 We had dinner that night at Vinera San Telmo, a very popular tapas bar. The food was delicious. Between us we ate far more food than two people should be allowed to consume. I particularly enjoyed the breaded prawns, Fraser liked the melted cheese.

The next day we walked around the Santa Cruz and La Arenal areas of Seville taking in the sights. Both areas are a maze of little alleyways and backstreets, half of which have no street names, the others aren’t listed on the map we had, which made navigation a little problematic.

The first stop was the cathedral with the Giralda tower (an old minaret). It is the 3rd largest cathedral in the world after the Vatican and St Paul’s, and holds the title for the largest gothic cathedral. It is spectacular both inside and out. Fraser got the audio tour which he enjoyed listening to on the way round, and I chose to just wander and take in the sights. It culminated in us both climbing the Giralda tower which gave us unrivalled views across the city. It was definitely worth the entrance fee of 8 Euros. 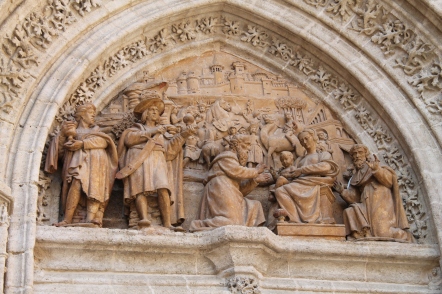 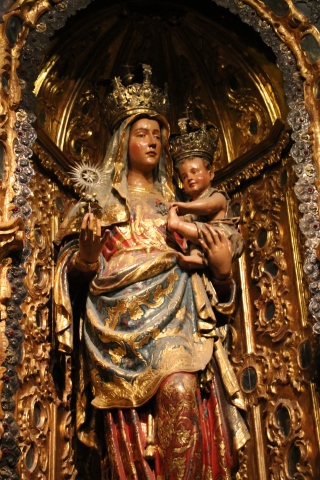 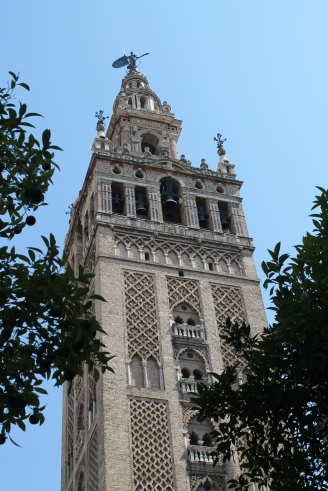 We had lunch at Osteria L’Oca Giulira on Mateos Gago just opposite the cathedral. The inside was beautifully decorated and we both had pizza followed by very scrummy deserts. 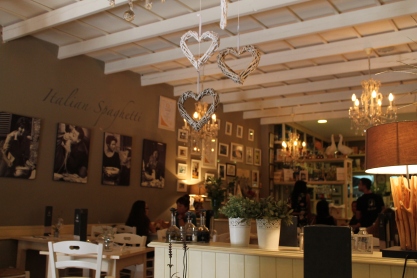 Our walk then continued past the bullring and theatre down the waterfront to the Torre del Oro, a tower converted into a naval museum. The guide books had told us this was free to visit on a Tuesday, it turns out it is only free until 13.30. We paid the entrance fee and had a look around. There was some cool memorabilia and paintings and lots of model ships and we could climb to the top for views along the river, however, all the information about the exhibits was in Spanish with no translation so for us it was not very informative. 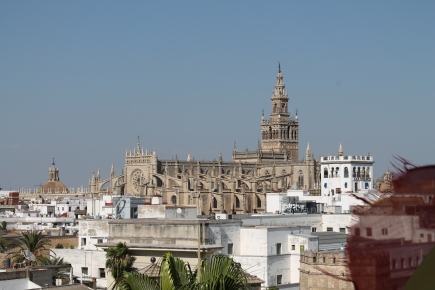 We then headed to the Alcazar, the royal palaces of Seville. We looked around the courtyards and the intricately mosaic patterned rooms. It was all very beautiful and old. It took me back and I could just imagine it in the days when it was in use. By the time we had reached the palace gardens though we were both beginning to fade in the Spanish heat so we called it a day, picked up supplies from a corner shop and returned back to our apartment. 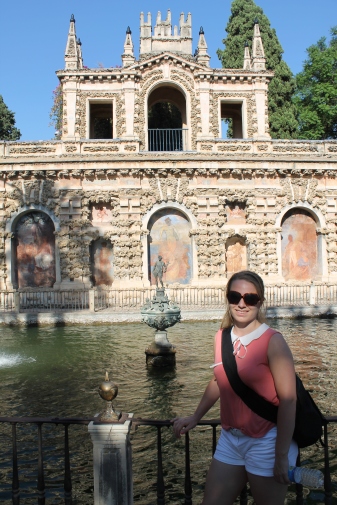 Seville is a lovely city steeped in history and beautiful old architecture. Getting lost in the back streets has a charm of its own and there are plenty of food and souvenir places down them to keep you entertained. The Plaza de Espana and the cathedral are the real highlights though and are well worth a visit.