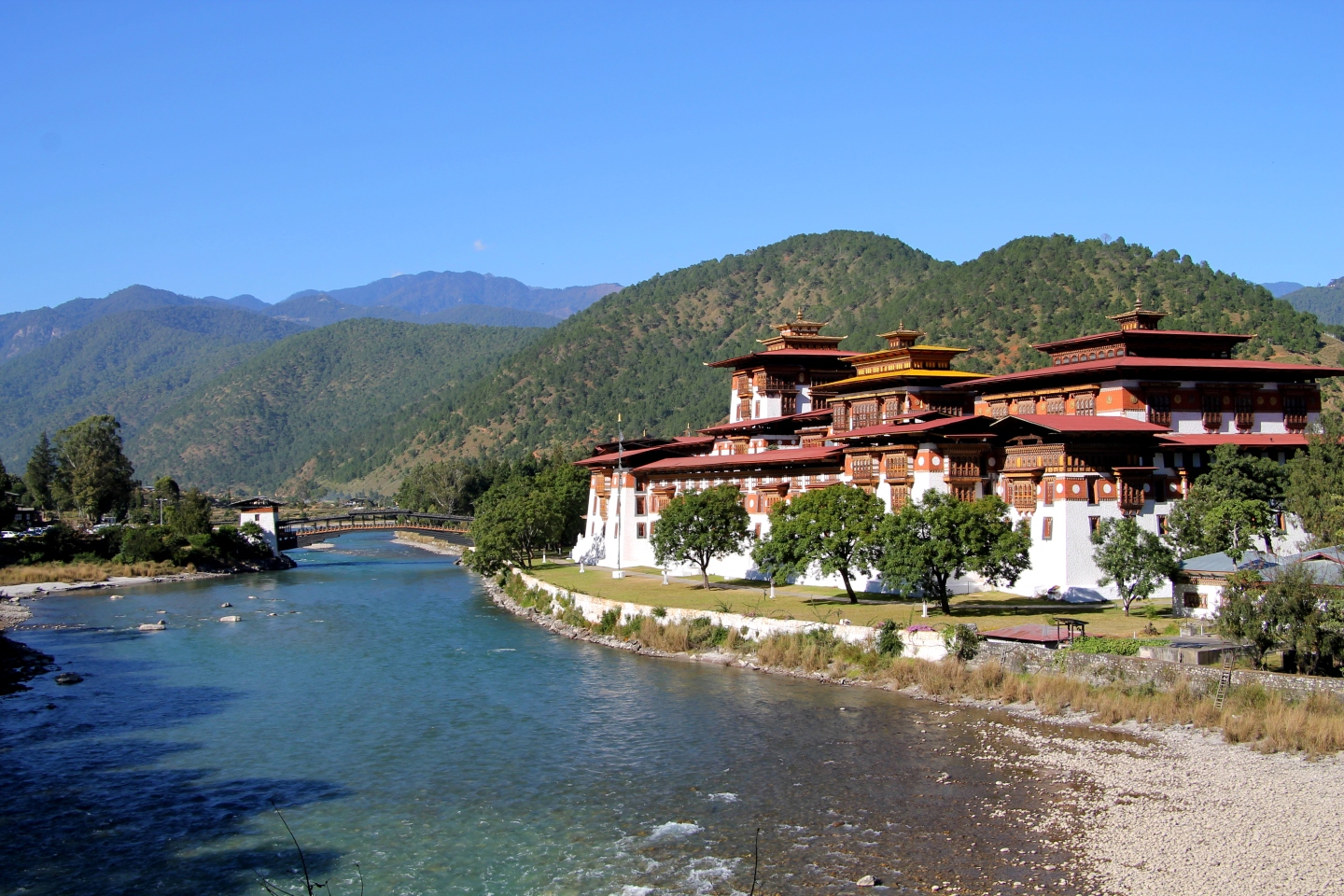 On our first full day in Bhutan we were met by our guide and driver at the hotel and started off with a visit to the National Memorial Chorten, a stupa built to honour the 3rd King of Bhutan in 1974. This is where many of the elderly residents of Thimpu spend much of their day although on this particular occasion many of them were up at a festival at the giant Buddha instead. The stupa shines in the sun and was our first introduction to some of the deities who protect the country from the different natural disasters (we would see many of these throughout the rest of the trip). The locals were reciting their Buddhist chants and spinning their prayer wheels whilst circling the stupa creating a Zen like atmosphere.

Just around the corner from this was Thimpu Dzong (fort) which houses both administration offices for the parliament and the monks’ summer residence. Tourists are only permitted in the monastery side and cameras are not allowed inside the temples and shrines within the country. Everyone must wear long sleeves in all Dzongs so it is advised to carry a jacket or long sleeved shirt around with you and the Bhutanese have to wear a shawl in the colour that signifies their social status, for the guides and common people this meant a white shawl with tassles. Inside the temple is so colourful with embroidery, carvings and painting adorning everything. It is both beautiful and peaceful. 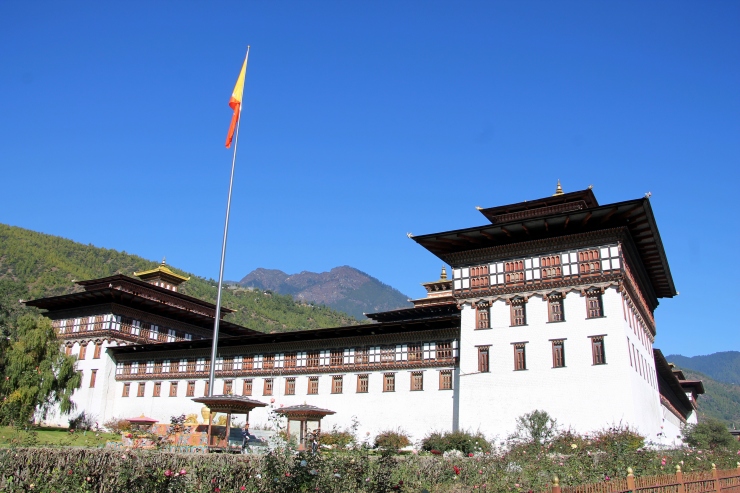 The next stop was Semtokha Dzong which was the first ever built in Bhutan and is located on a hill overlooking Thimpu. The big draw to this Dzong is the view across the valley below and again it is very pretty inside.

From here we drove over the Dochula Pass which reaches a height of 3100m above sea level. The road is unfinished at present which makes for a very uncomfortable ride up to the top but the views are more than worth it. At the top there are 108 stupas built to commemorate the Bhutanese killed in a battle with Indian insurgents in 2003. There is also a temple, which was closed when we were there, and a restaurant where we ate which turned out to be food with a view. The main attraction of the pass is the scenery with the Eastern Himalayas creating the backdrop, including a glimpse of Bhutan’s highest peak, Gangkar Puensum, in the distance. This may not be quite as high as the tallest in Bhutan’s neighbour, Nepal, but at 7158 it is still impressive in its own right. We were blessed with the most incredible weather which made the whole thing simply amazing. 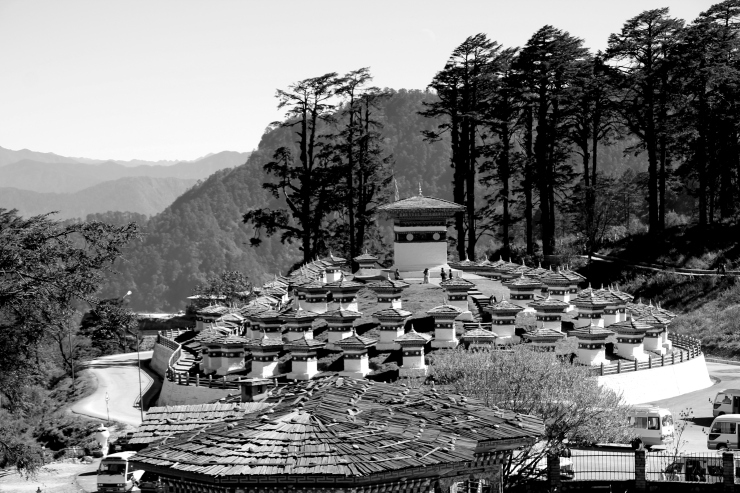 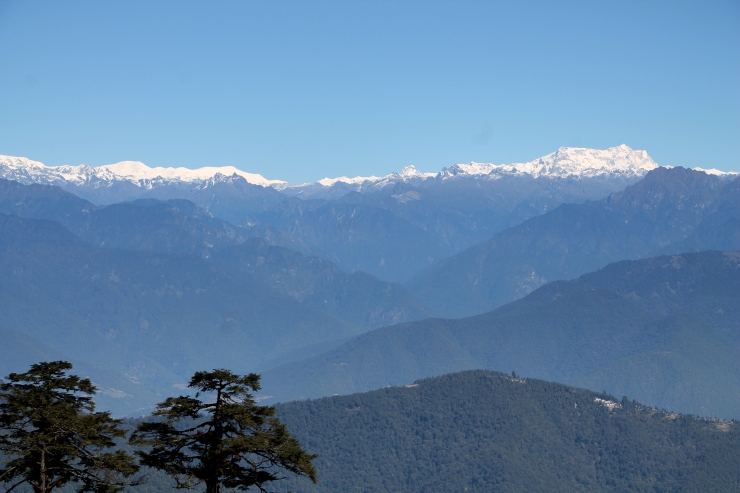 Once I was finally able to tear my eyes and camera away from the mountains we had to continue down the road from hell to Punakha Dzong. This is declared the “most beautiful Dzong in Bhutan” and I would wholeheartedly agree with this proclamation. Situated on the confluence of two rivers with the hills in the background it is so picturesque and the attractiveness is continued on the interior decoration also. If you only visit one Dzong whilst in Bhutan (although almost no itineraries allow for that) I would advise you to make it this one! 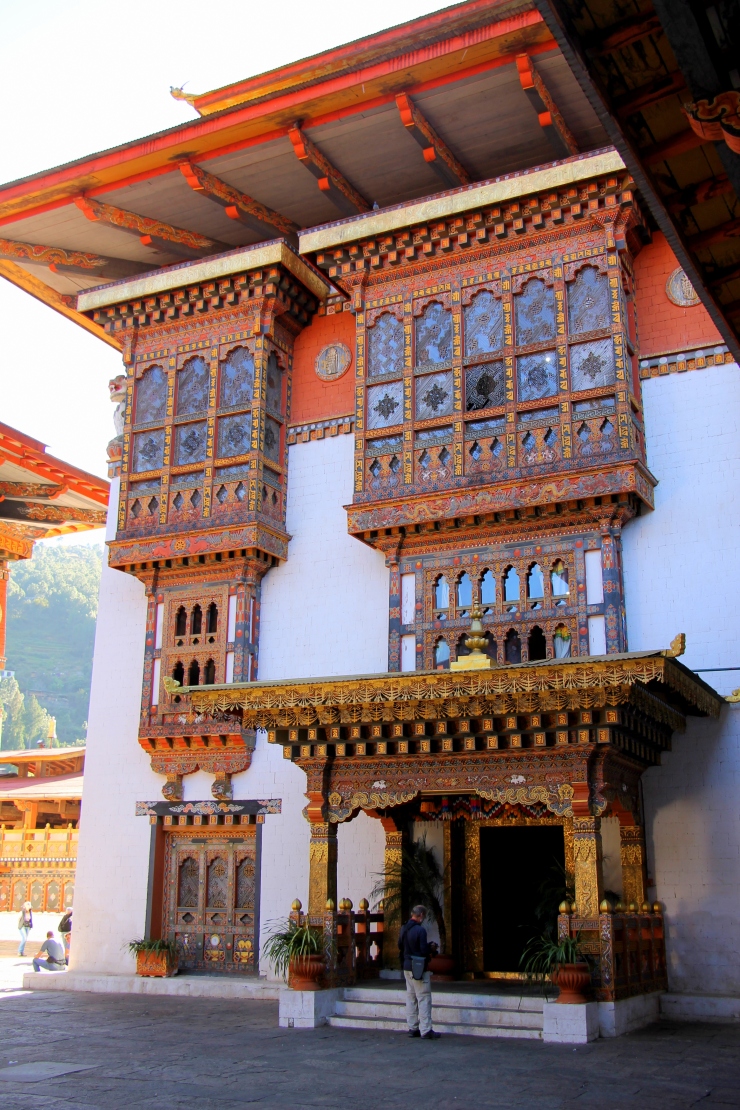 Then it was to our hotel in Punakha for dinner and bed after watching the sun come down over the hilltops. All the landmarks we saw today were amazing although being a landscape lover the Dochula Pass and Punakha Dzong were my favourite stops. 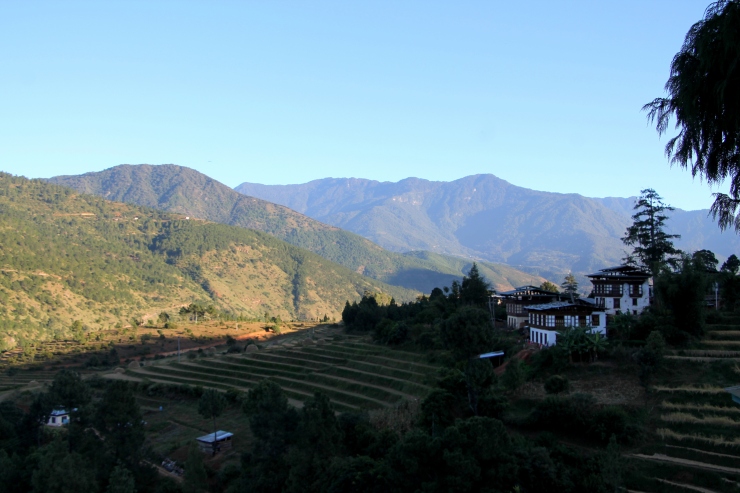 Have you ever been to any of these sights in Bhutan? Were you blown away by the beauty of the area or did you feel differently?