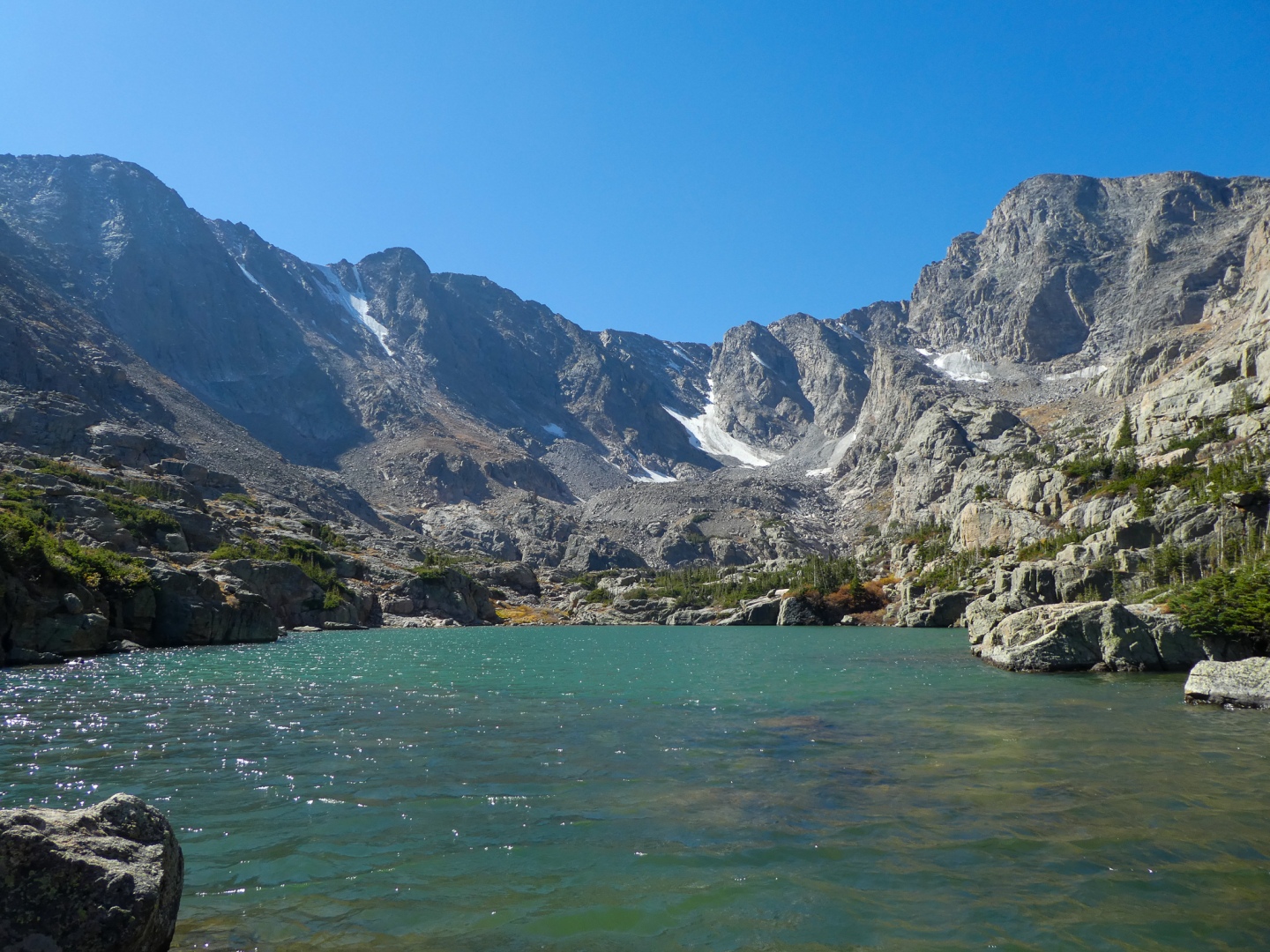 Our last destination before returning to Denver for our flight home was the Rocky Mountain National Park in Colorado. We stayed the night in Estes Park before getting up the next morning to go out hiking. We chose the Sky Pond out and back trail that I found on the All Trails app. This was marked as a hard trail but we decided that we would give it a go anyway.

The app advised us to set off from the Glacier Gorge Trailhead however when we arrived mid morning this car park was already full so we carried on a little further to the Bear Lake car park where we were able to get a spot. There was the option from here to get a shuttle bus back down to the original start point but upon talking to a ranger there he said there was also a hiking route that met up with the trail we needed to we did that instead.

With this is mind we descended down to the junction where we met the route we intended on following then kept right going up towards Alberta Falls, we didn’t stop her for long on the way up as there were a couple of larger groups there (we spent a bit longer here on the return journey) but they were not the most exciting waterfalls ever. As we continued further up we stayed on the Glacier Gorge Trail to the right rather than turning off onto the North Longs Peak Trail. Then at the next junction we took the middle option along the The Loch Trail which after a couple of steep patches brought us up to The Loch itself. This is a subalpine lake at 10,190 feet (3105m) above sea level. Here we saw quite a few Instagram sessions taking place so we didn’t linger here too long, just enough for a water break. 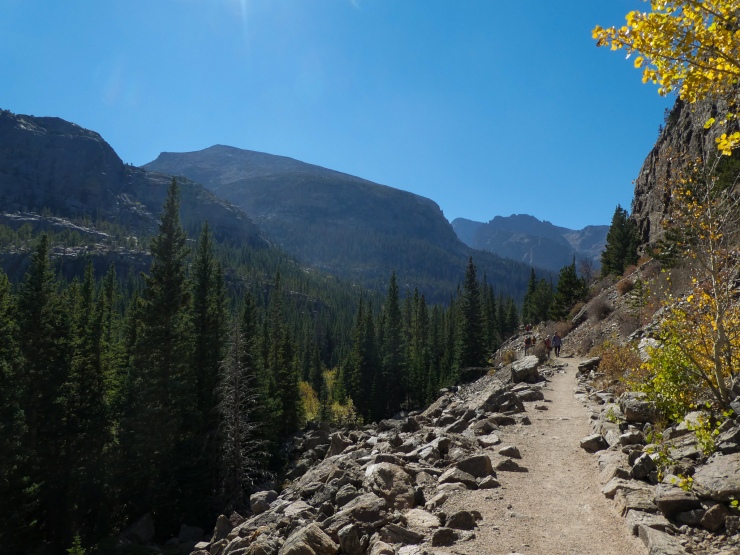 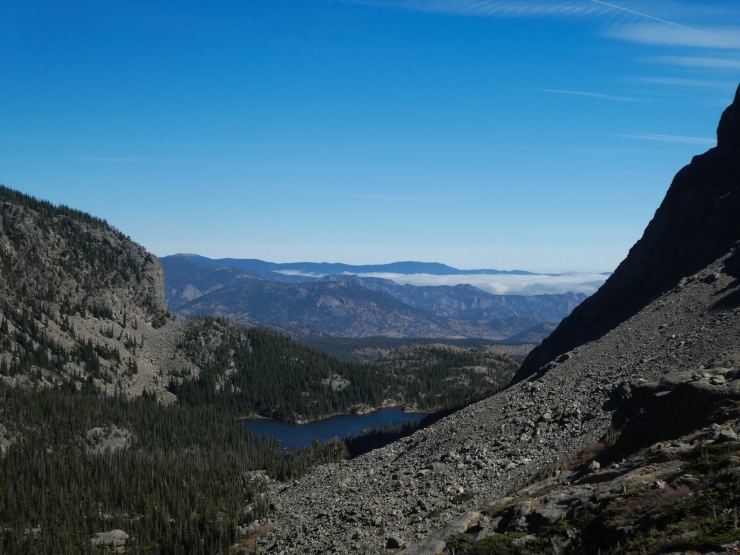 The trail continued to the right side of the lake then once past it started to ascend rapidly up pretty steep stairs towards the Timberline Falls. We were there in late September and many area of these falls had already begun to freeze over and there were some icy patches on the trail meaning we really had to be careful of where we were stepping. Alongside the falls is a scramble of about 100 feet that you have to go up if you wish to continue further. It is not a technically difficult scramble by any means but I did have to use my hands to get up it and it is probably not advisable in bad weather or if you are particularly scared of heights. 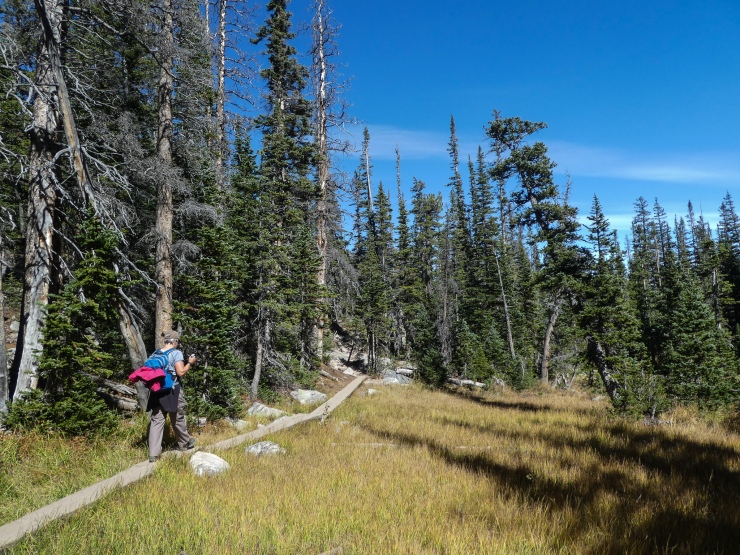 The pay off for completing the scramble is arriving at the Lake of Glass which is beautiful (as is the view back down the gorge if you turn around and look back the way you have come). It was extremely windy up at this point so despite the fact we were all sweating from the climb up we quickly had to put our warmer layers back on. We then skirted around to the right of the lake on a sometimes narrow, rocky path and continued across the meadow to Sky Pond, the terminus of our hike. 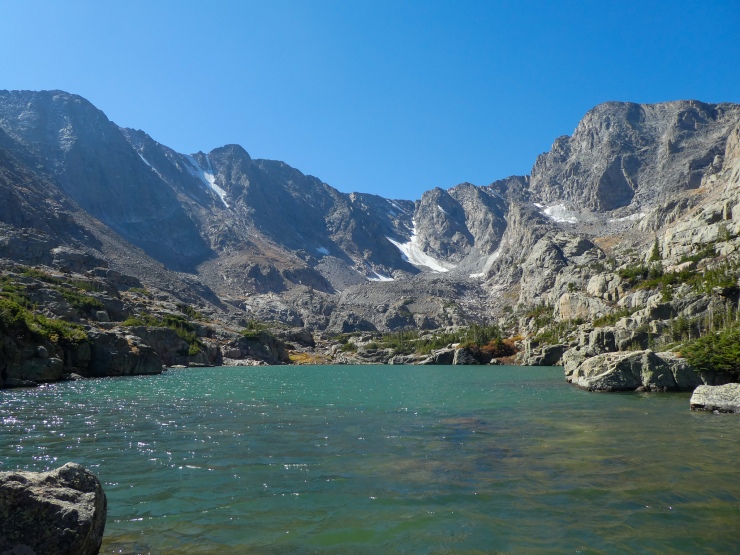 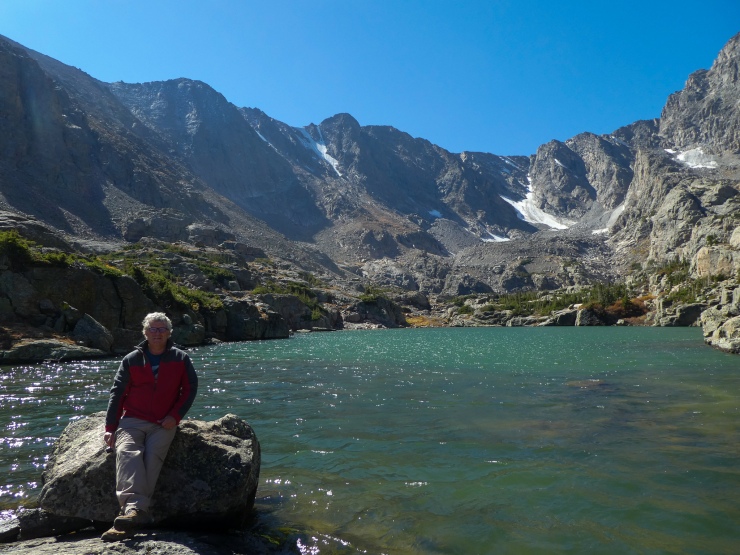 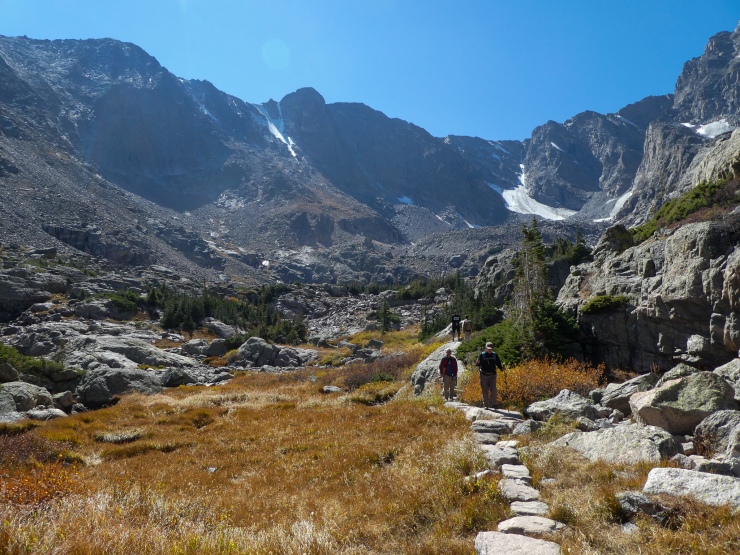 Sky Pond is an alpine lake sitting at 10,900 feet (3322m) above sea level. It is stunning, surrounded on 3 sides by sheer cliff walls. We found a spot shaded from the wind to sit to have our lunch whilst looking out upon Powell Peak to our left, Taylor Peak straight ahead and The Sharkstooth to our right. It really is spectacular and made it more than worth the effort to get up there. 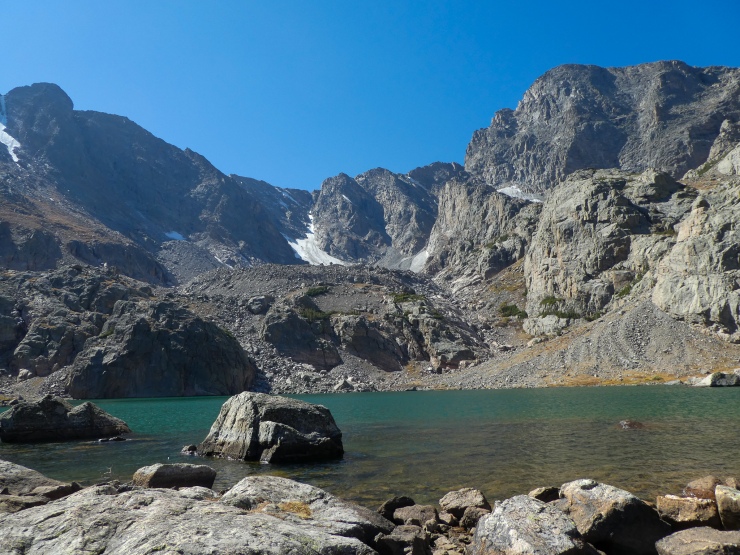 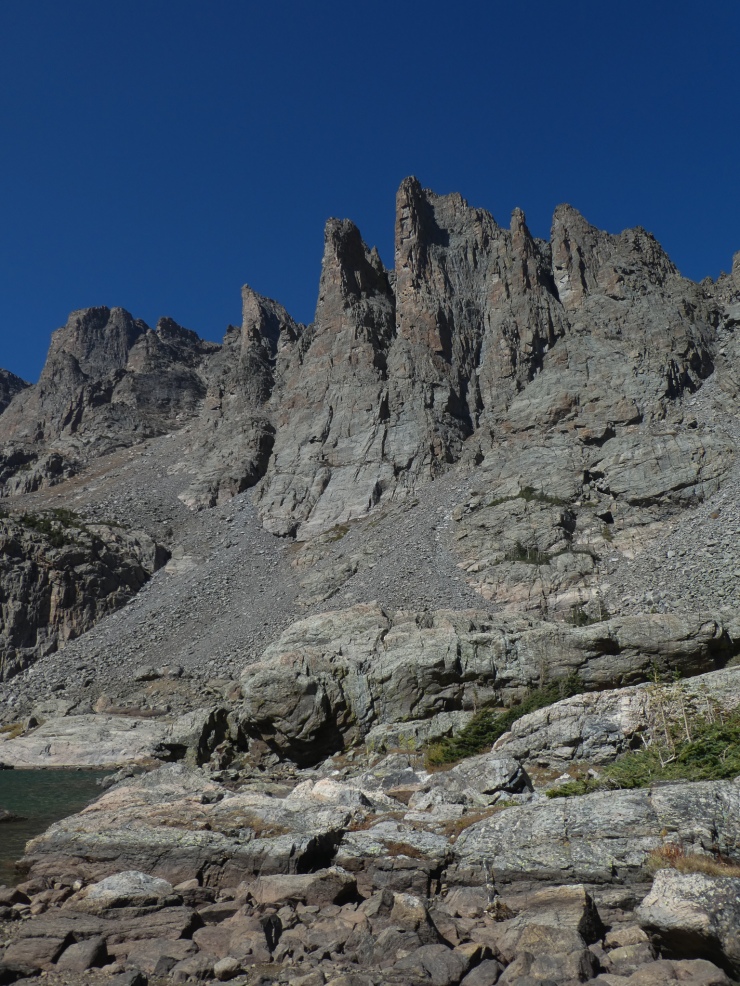 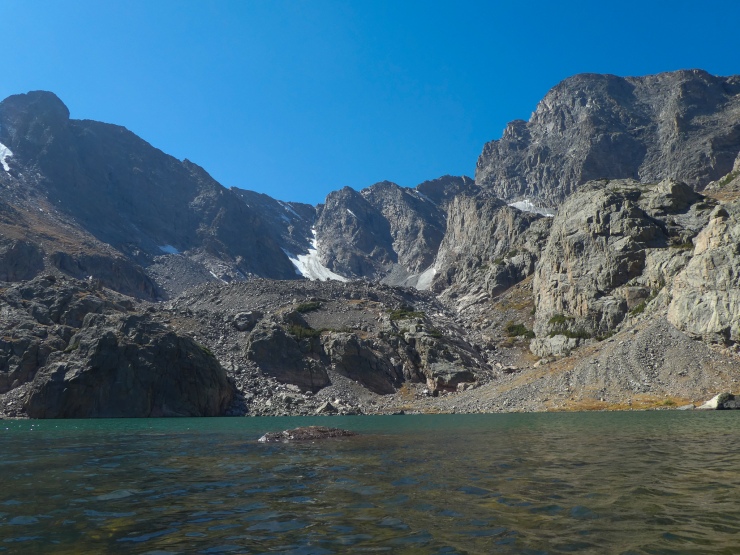 We then had to do the whole route in reverse to get back to our car. Overall the Sky Pond Trail is 9 miles long although we did a bit further due to starting at the Bear Lake Trailhead rather than the one at Glacier Gorge. It completely lived up to its “hard” billing, mainly due to the elevation of the whole trail and the 1,726 feet (526m) of elevation gain that we had to hike some of which was really steep. Add into that the icy patches, steep steps and the couple of areas we had to scramble this is definitely not one to do if you have no previous hiking experience. The plus side to it all though is it is probably has some of the most incredible views and scenery of anywhere I have ever hiked before (perhaps matched by the Grand Tetons or the Rockies in Canada) and I felt I had really achieved something by the end of it. I would highly recommend this trail. 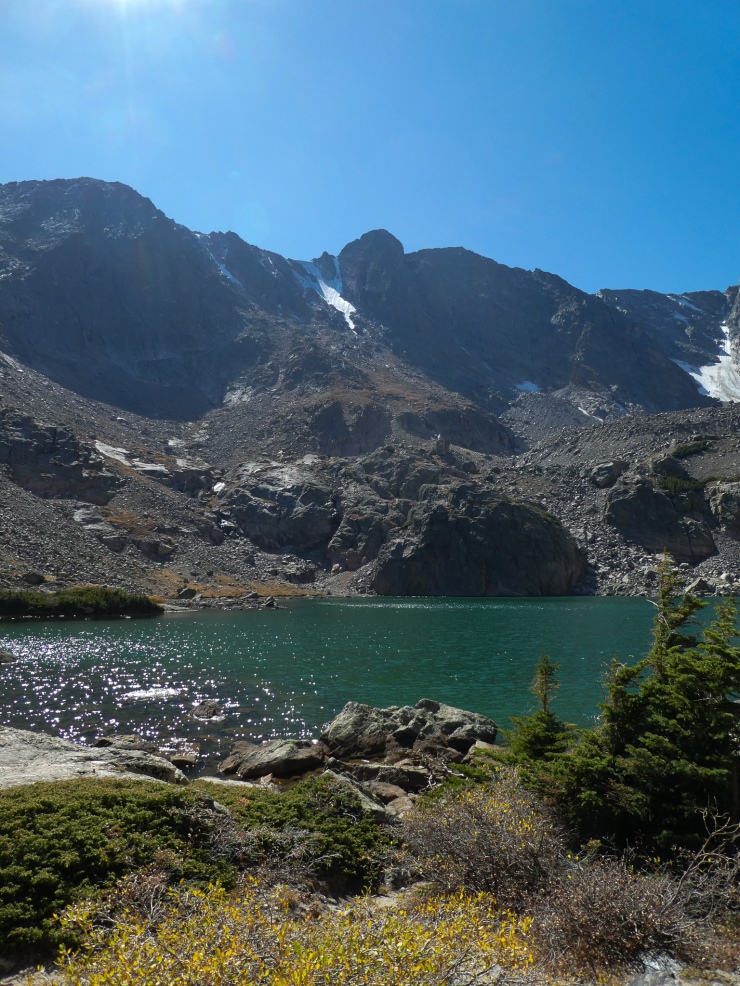 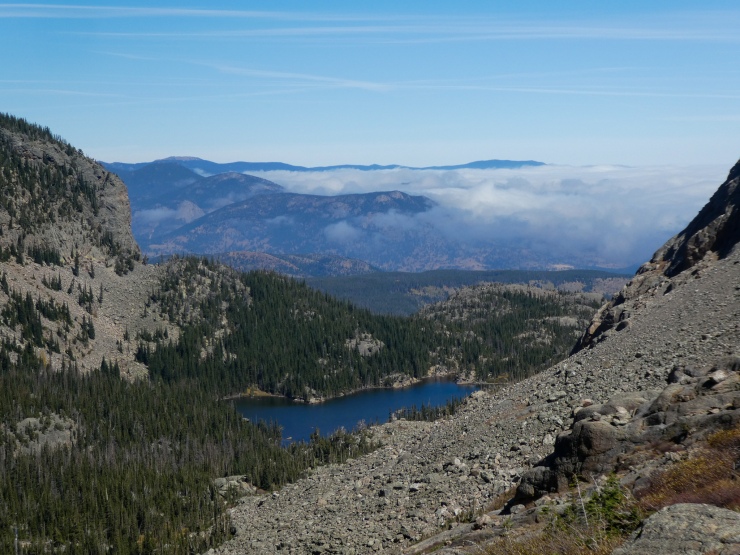 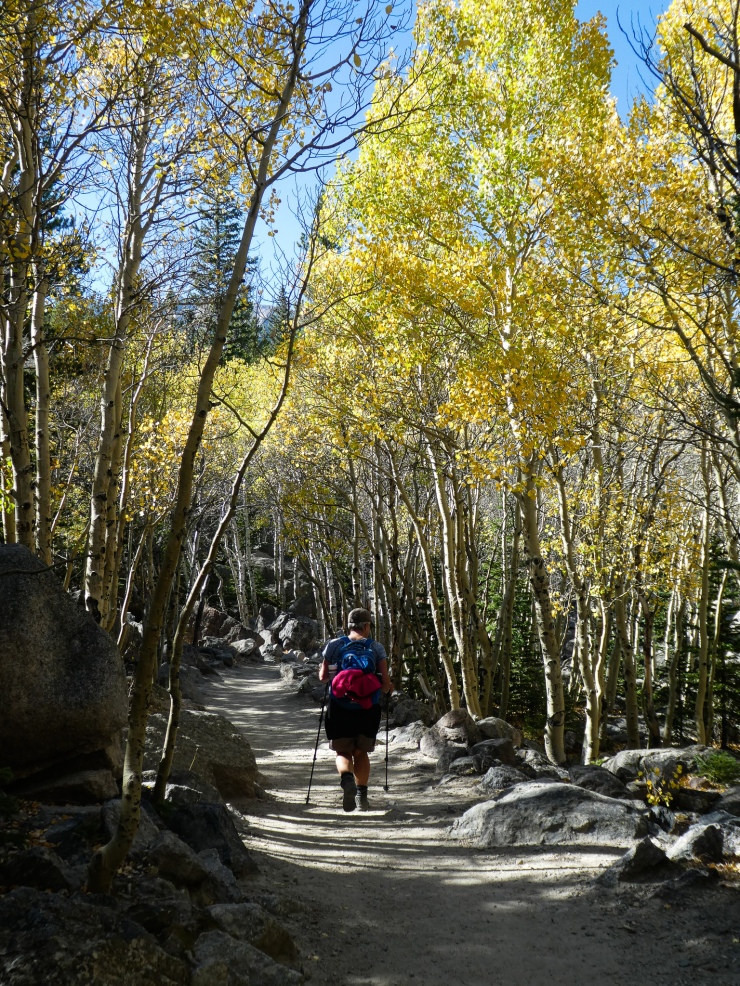 After we had finished our hike we wanted to visit the Alpine Visitor Centre at the top of the Trail Ridge Road. This is the highest continuous paved road in the United States and is a mixture of beautiful and absolutely terrifying if you look at how steep the drop off is should you make a mistake. We wanted to go there mainly to experience the road which reaches 12,183 feet (3713m) but we did also go into the centre which is the highest in the National Park Service. As expected the views from here were pretty amazing and was a cool if not slightly scary way to finish the trip. 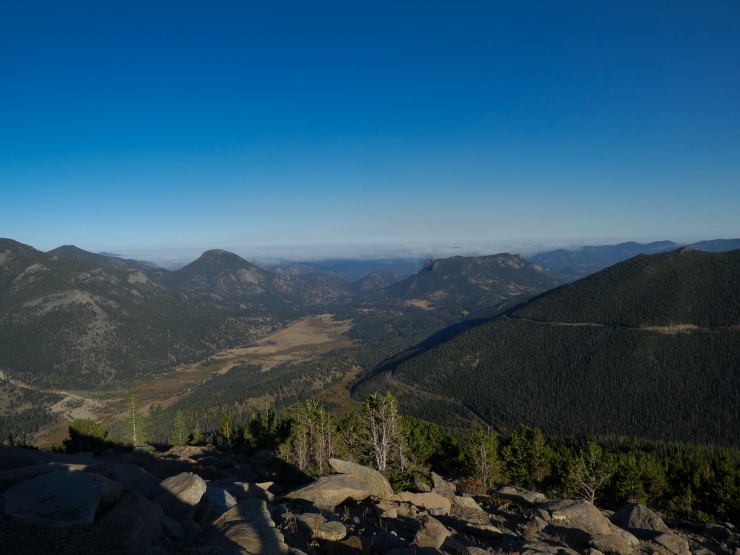 From here it was back to Denver for one night. The next day we took a little time to explore the city before heading back to the airport to fly home.

Do you have a favourite trail in the Rocky Mountain National Park? Have you visited any other cool National Park Visitor Centres?