After an uneventful flight with very little sleep we were picked up by a representative from Bohemian Tours to be taken to our hotel. This was our first experience of the Indian roads and it is terrifying. There don’t seem to be any rules other than to use your horn, constantly!

Once at our hotel, the Surya International, we got checked in, then promptly fell asleep despite it being mid-afternoon. We woke up for a meeting about our Delhi tour the next day and some dinner at the hotel restaurant. We thought this would be an easy option, however nearly everything we asked for was met with the response, “it is not possible.” The food we did end up getting was very nice, but not what we were after.

The next morning we got up, had breakfast and met up with the Delhi tour. We had to walk to the main road to be able to get the bus to travel from New Delhi to Old Delhi. The areas are named as such as Old Delhi was the Muslim empire’s town throughout the various emperor’s dynasties. New Delhi was built after the revolt when the British were in charge.

In the Old Town we were dropped off at the Jama Masjid (Friday mosque) which is one of the largest in India. You have to pay an entrance fee and for any phones or cameras even if you don’t intend to use them. They also tried to charge people to leave their shoes outside as they have to be removed before entry, I put them in my bag to avoid the hassle.

Inside there is a large courtyard where prayer can take place. Foreign women are provided with a gown to wear, even if they are already completely covered up and must be accompanied by a man if they wish to climb the tower (although we did not do this). The mosque itself is very grand and there are good views across the valley towards the Red Fort. It is a bit dirty though, expect to walk through plenty of pigeon poo and the touts are quite pushy but it was a nice start to our trip. 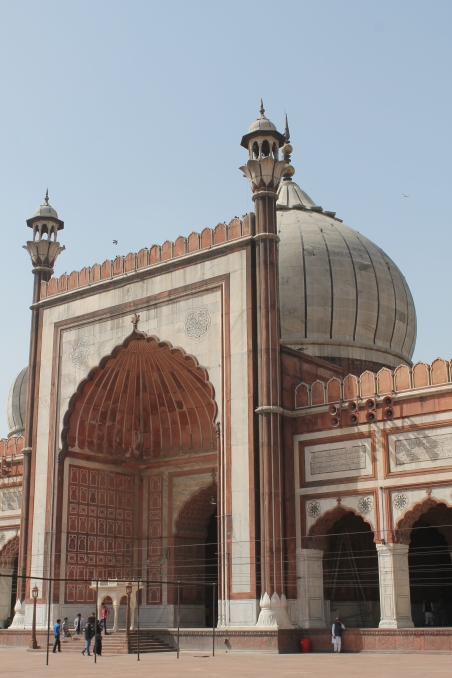 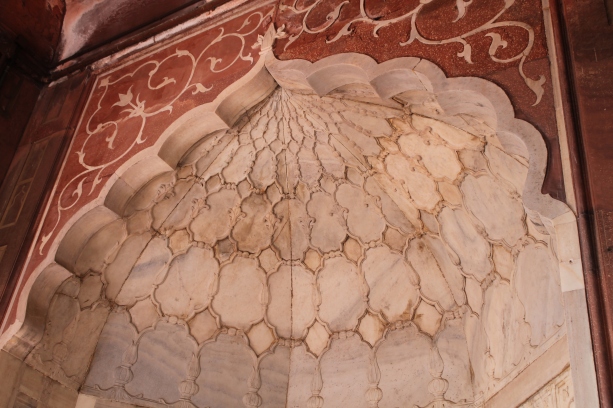 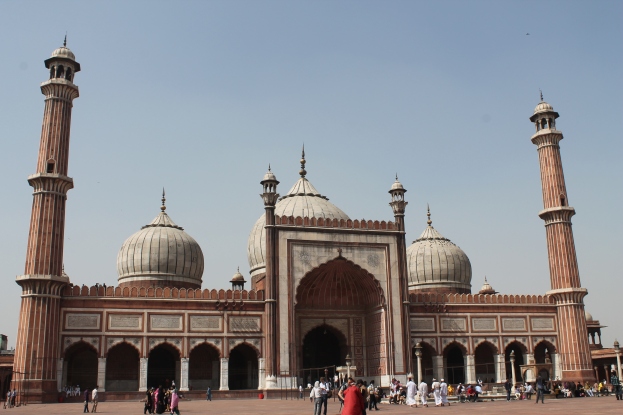 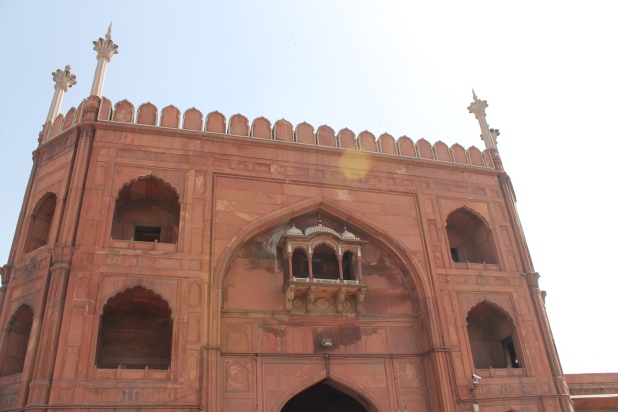 We then walked through the Chouk Bazaar to reach the Red Fort. The walk was chaos. The Old Town is known for its narrow streets. Rickshaws and mopeds still manage to get along there with pedestrians having to flatten themselves to the side to let them past. There are stalls selling all kinds of trinkets and daily items for both the locals and tourists. We did not have much time to look as we were rushed through the area and if you stopped you would lose the whole group. We did have to cross a couple of busy roads which is a challenge itself, the technique is to just put your hand out, go for it and hope all the vehicles stop.

The Red Fort is an impressive monument from the exterior made from red sandstone. Inside there are palaces in varying states of disrepair, some are very pretty, as are the gardens, some are currently having work done on them and some look a little decrepit. In its prime the fort had more palaces however they were destroyed when the British were in charge and they needed to put barracks in their place. 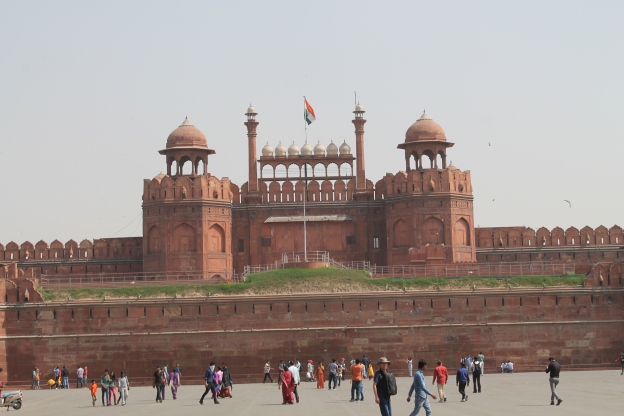 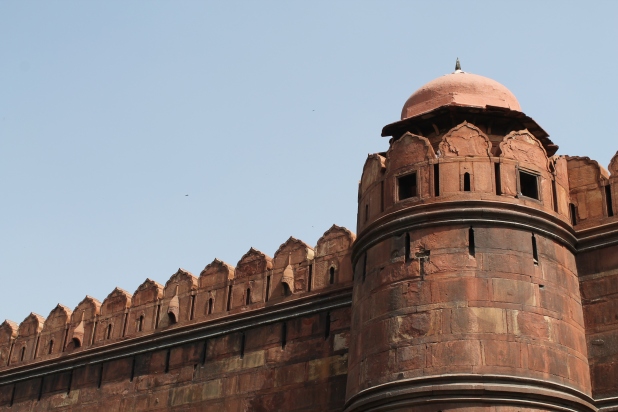 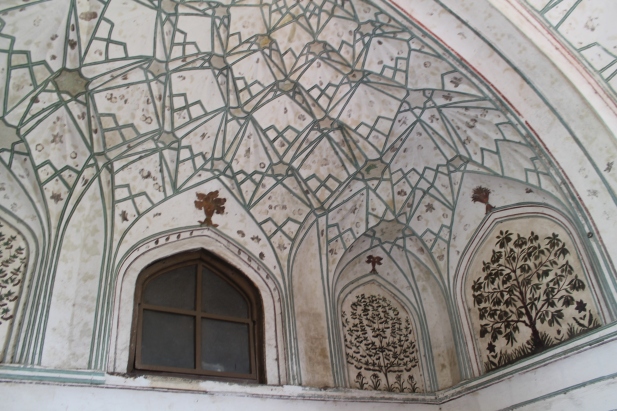 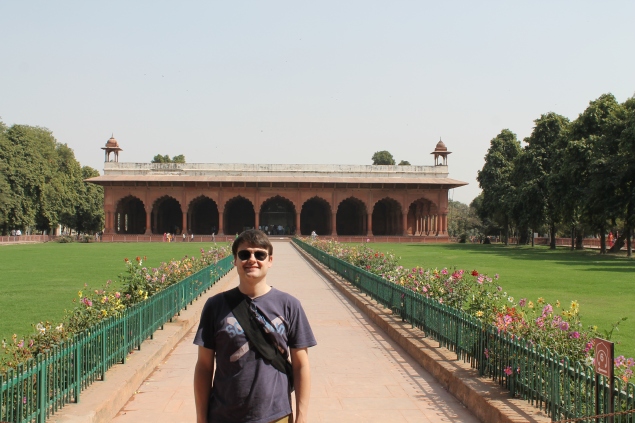 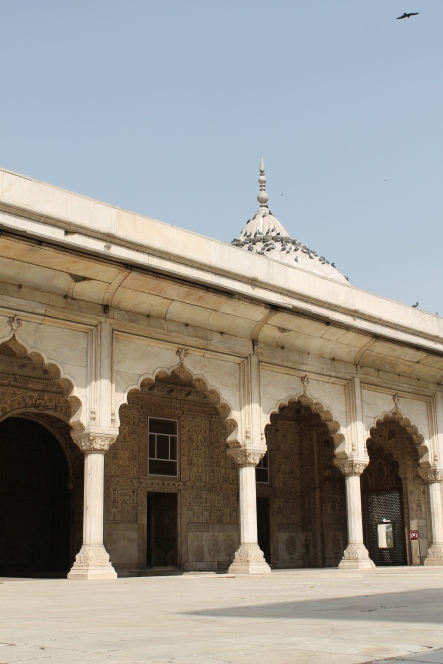 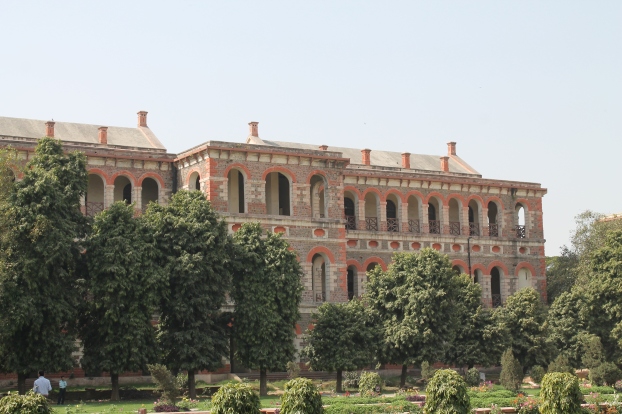 We then went for a very late lunch which was delicious in a hidden little restaurant which gave us a chance to get to know some of the group.

On the journey back to the hotel we drove past India Gate and the Parliament buildings which we were able to get some pictures through the bus windows.

Back at the hotel we had a briefing about the official start of the tour the next day and then we went to bed ready for the early start the next day.