Today having done some actual research into things to do in Copenhagen we actually had a rough itinerary for the day. Our plans had been to hire bikes from the hotel to get around but the weather was miserable so we considered getting the hop-on-hop-off sightseeing bus as it stopped right outside our hotel. Ultimately we ended up donning our waterproofs and hiring the bikes anyway.

Our first major stop for the day was the Amalienborg Palace to see the changing of the guard then use the tickets purchased the previous day to have a look inside. The changing of the guard was marketed as a big event and so inevitably it attracted large crowds. Everyone had to line up to allow the troop to march past and then there was a scrum to push forwards and view the actual swap. It was one of the parts of tourism I dislike the most, so at this point we gave up and stood at the back. In all honesty not much happened anyway, there was a lot of standing around then moving to stand somewhere else until there was a new guard at each position. I would probably give it a miss and enjoy the palace at a quieter time in future. Inside was very grand and ornate although in comparison to Rosenborg Castle the previous day I was not as enamoured- I have major throne room love!

Further along the coast we came to one of Copenhagen’s most famous landmarks, The Little Mermaid. This statue perched upon a rock overlooking the harbour was busy with people jostling to get their money shot. I don’t know what I was expecting but again this touristy attraction didn’t really excite me, it felt more like I was just ticking it off a list. 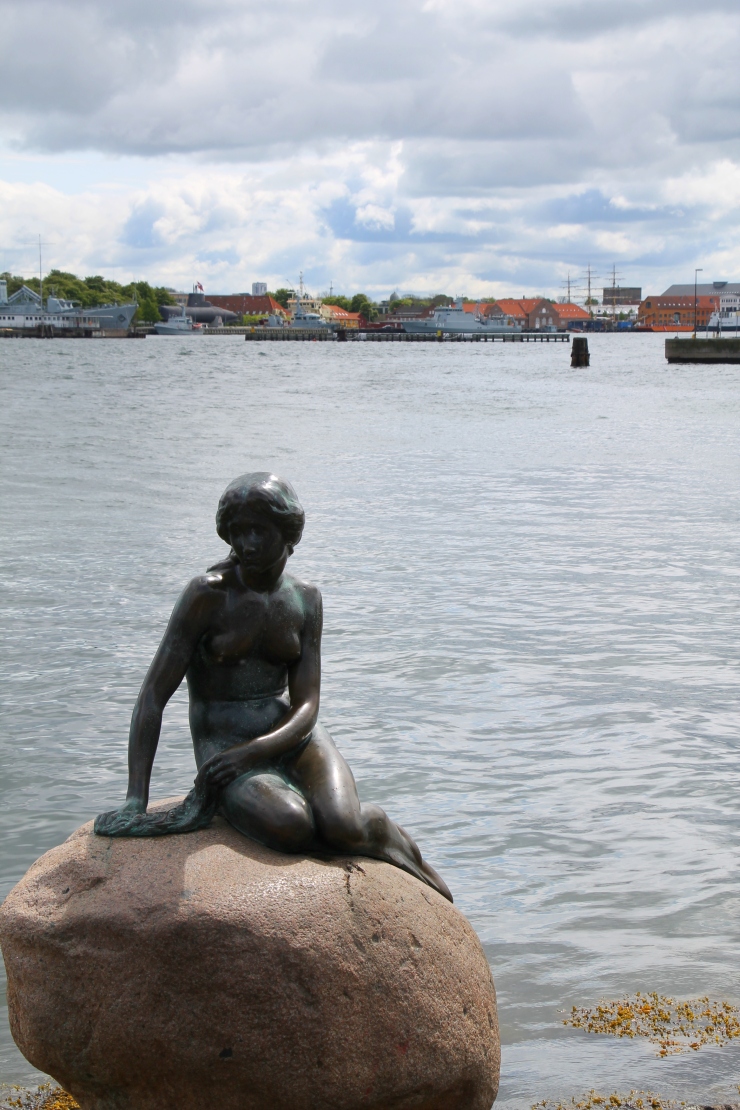 Just inland from the mermaid is the Kastellet, a star shaped fortress from the 17th century. It is surrounded by a moat then an embankment on the perimeter which you can walk around, or in many peoples cases run around as it seemed to be a popular jogging route. Inside this the barracks burn orange which is striking against the greenery of the surroundings. It is worth spending a short time here if already in the area to see the Little Mermaid as it is a very peaceful spot. 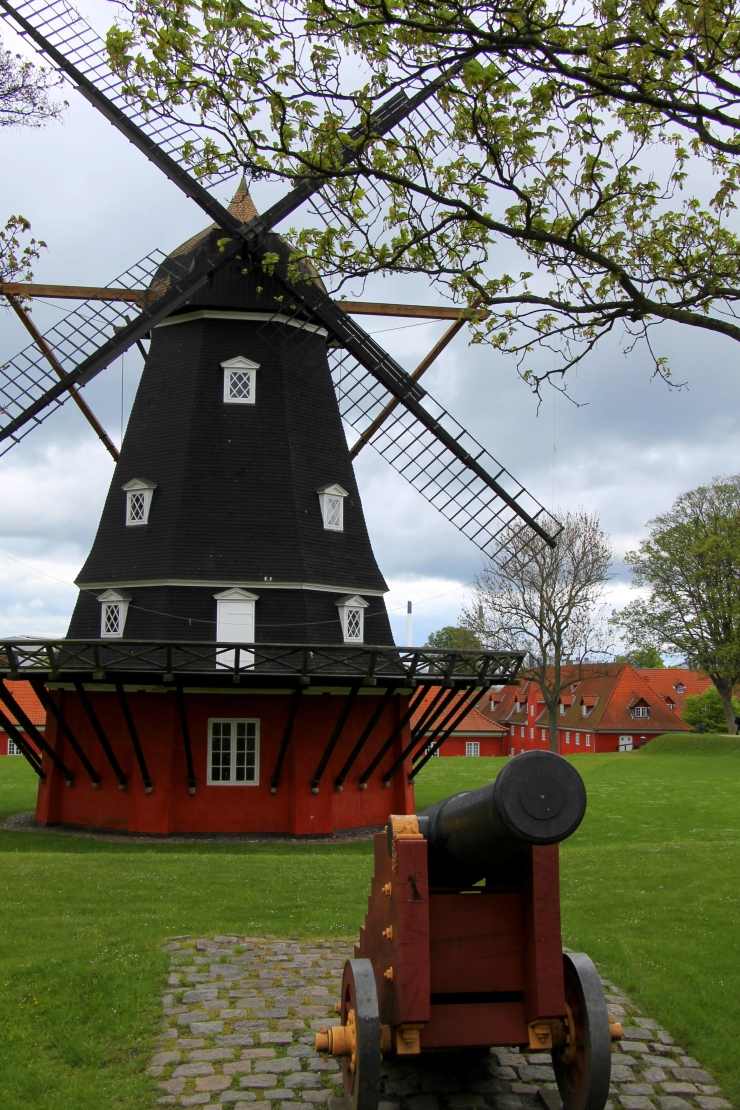 Our next stop was back past the Amalienborg, around Nyhavn and across to Christianshavn and the Church of our Saviour. I had spotted this from atop the Rundetaarn the day before and yet again my love of getting up above the city got the better of me. We paid and joined the throng of people trying to reach the top. This steeple is popular to climb because the last bit of the ascent is up the outside offering 360 degree views of the city below. This is not one for those who suffer from vertigo as when you get towards the top, when the stairs disappear to nothing, you can definitely feel the building swaying in the breeze. I loved it, Fraser was not so enthusiastic. The only downside was the number of people up there at the same time. Perhaps they need a timeslot system or something to prevent all the pushing?!

By the time we had finished this we were starting to get fairly hungry. Following a tip off from a Danish friend of mine we stayed on Chritianshavn and went to an old warehouse now converted into a place called Papiroen. This is a bustling street food hall not dissimilar to Granville Island (and you can read about how much I loved that here). Almost any cuisine you can think of is catered for and although it is not always the easiest to get a seat, with some perseverance you can. The crowd there was diverse although mainly leaning towards the hipster side of things and the food we had was delicious. It is not somewhere I had seen mentioned in any information I had read prior to the trip (although I have seen some mentions since so it may be increasing in popularity) but for us the inside tip was most welcome.

Following a fairly leisurely pace of lunch we had a couple more stops on our bike tour. First of these was Christiania, a declared free state within Copenhagen. Surfaces here are covered in bright graffiti which meant it was a shame that photography was prohibited inside. This is to protect the identities of the residents who sell cannabis from little kiosks dotted along the main street. At the far end was a large communal area where there was music and a lingering fog of weed fumes hanging in the air. The whole state is pretty alternative and I am not altogether convinced Fraser and I really fit in wearing our cycling gear. It was interesting to see but I personally didn’t want to dedicate a whole lot of time to hanging out there.

Our final stop we crossed to Christiansborg Palace near the stock exchange, distinguishable by the narwhal-like tusk structure atop the building. I think the palace was open when we got there but by this point we were happy to just wander the grounds and take it in from the outside.

We then cycled back to the hotel to hand in the bikes. Cycling in Copenhagen is efficient and easy. Everything is flat making life simple and it allows you to cover far more ground than if travelling by foot. It is a cycle friendly city with an abundance of cycle lanes so you rarely feel unsafe and at the main attractions there are plenty of racks to store your bike at.

This was a day of unexpected, happy surprises but also of disappointments. The popular activities (e.g. changing of the guard, the little mermaid) seems overhyped for what they were, but other things such as climbing the tower of the Church of our Saviour and eating at Papiroen were really great. Copenhagen is a beautiful, chilled out city, even if it very expensive, and I would love to go back sometime. 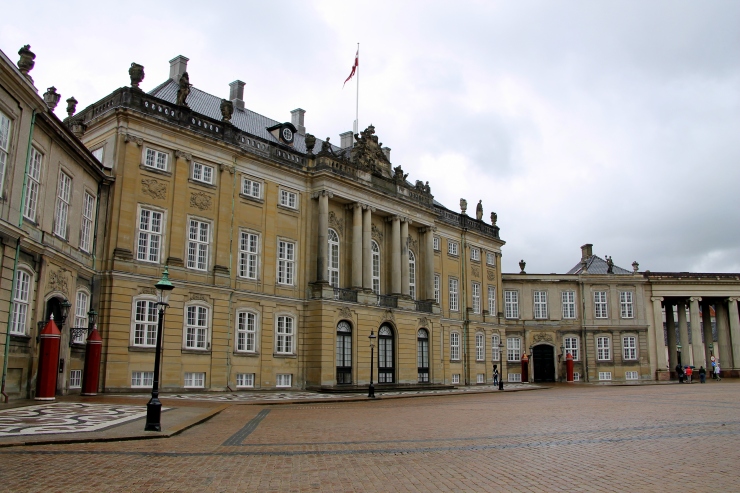 What do you think of Copenhagen? Is it somewhere you have been or would you like to go? Any top travel tips?