On our first full day in Vietnam we had an early start to catch the 06:40 train to Phan Thiet. Saigon station was surprisingly easy to navigate so we found our correct train and seats with no issues. We did have to be there 30minutes early and we boarded at that time- don’t leave it until the last minute to arrive because we left on the dot. As it was only a 4hour train there were no sleeper seats but we did choose the soft seats over the hard ones for slightly more comfort. Our main issues started once we got off the train as we took a little time to disembark and so missed all the buses heading for Mui Ne as we didn’t know where to go to find them. This all meant that we had to give in to one the many taxi drivers who had started hassling us as soon as we had arrived to take us to our AirBnB.

Our AirBnB was at the Van Nguyen Guesthouse which was well located in Mui Ne. The rooms were on the smaller side but nice and clean and we had access to a kitchen. The pool area was lovely as well. The front desk were able to organise a moped for us to use to explore the area. 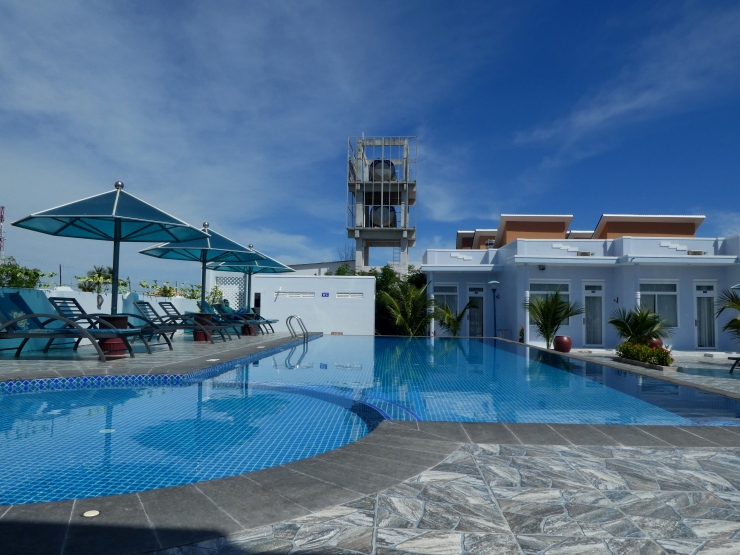 Our first destination on the bike was the Fairy Stream. This involves walking through the stream itself so isn’t really suitable for long trousers as we saw some people wearing. At the beginning the route was extremely crowded with big tour groups that seem to move at a snail’s pace. Once we had overtaken them it thinned out slightly. Initially it doesn’t seem that exciting at all, you are mainly walking through vegetation which is pretty as it creates a tunnel over you, but nothing special. As you make your way further along the plants thin out and the scenery becomes much sandier with the walls jutting up dramatically to the side of you, simple grey-whites juxtaposed with fiery reds make it very striking. The only issue here is that at times you can end up jostling with people for the best opportunities. 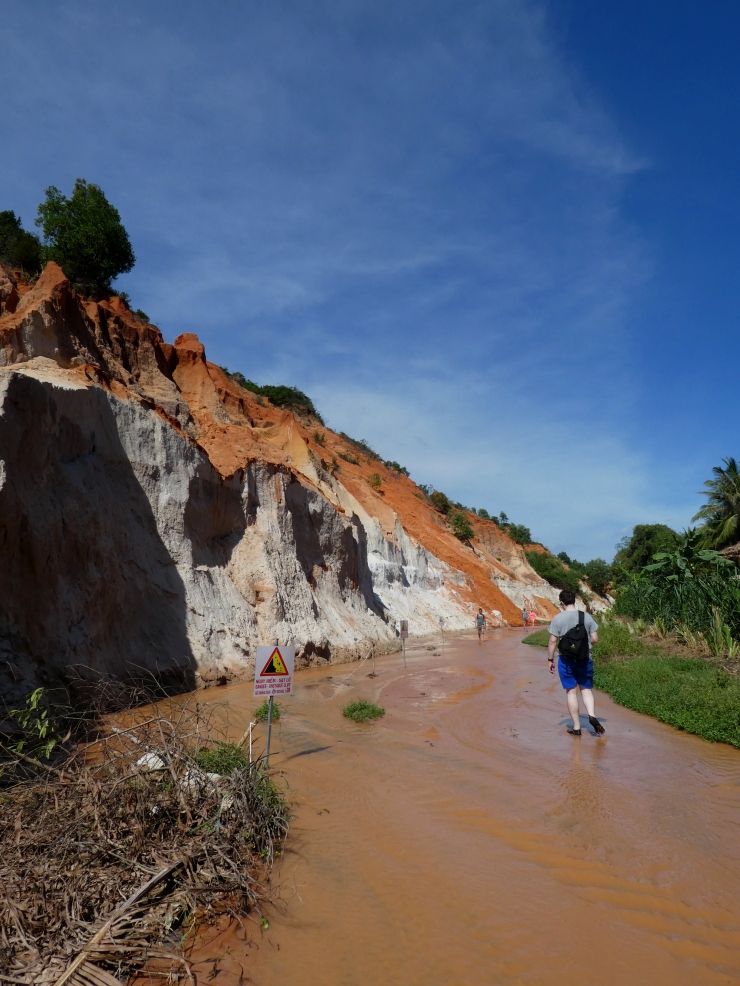 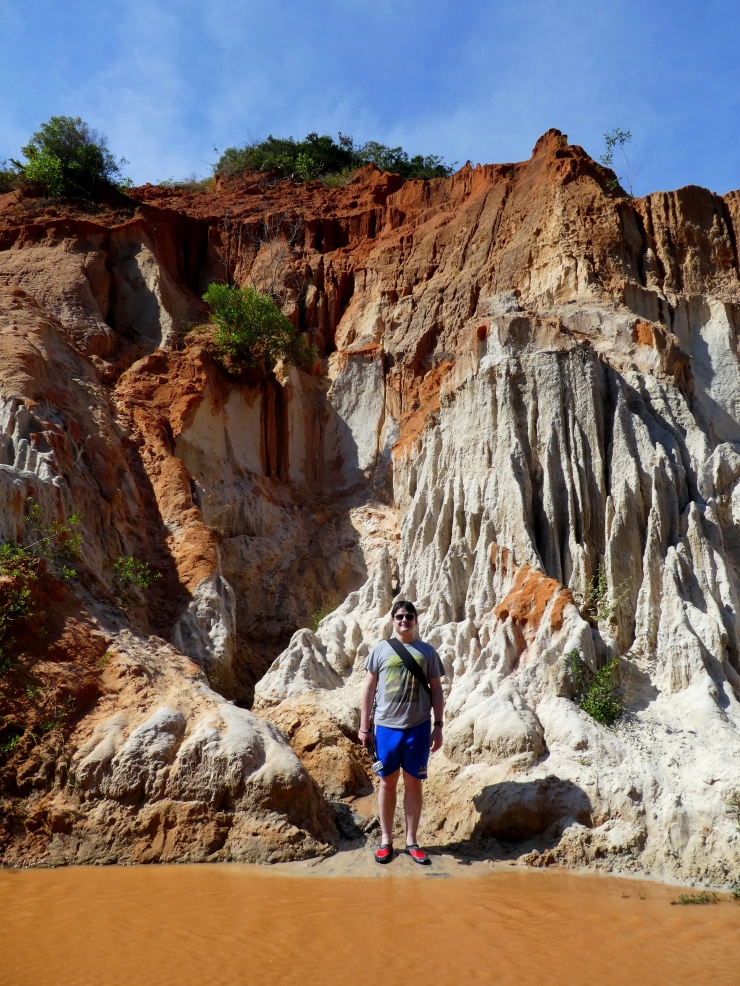 After once point where I sank waist deep into the sand much to my shock and Fraser’s amusement we decided to stop at one of the small cafes dotting the bank for a drink and an ice-cream. Here we were treated to some truly excruciating and unashamedly enthusiastic Vietnamese karaoke, a particular highlight being the point when 3 separate groups were singing 3 individual songs that clashed no end. This was our signal to pay up and carry on along the stream. 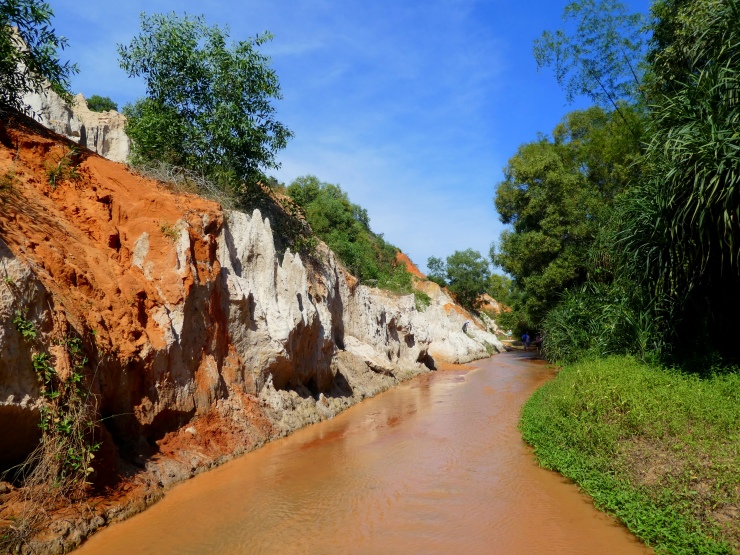 Not much further along was the waterfall that marks the end of most peoples’ trip (some did climb up the side and continue). Considering how busy the beginning of the walk had been, we had the waterfall to ourselves with the exception of a solitary crab. When another group did arrive we took our leave and set off back the way we had come, past the masses and back to our motorbike which was thankfully where we had left it.

We then made the drive north along the coast towards the white sand dunes. On route we were pulled over by a police man who demanded payment to allow us to continue, apparently we required a 7 day pass to allow us to drive in Vietnam. Whether this was true or not I don’t know but at the time we had little choice but to pay it. Annoyingly despite it being a “7 day pass” the officer refused to give us any proof we had paid and just told us he had put Fraser’s name on file. The whole thing seemed a bit dodgy but we were stuck for any other options so we had to go along with it. If you do decide to do the drive, take the smaller road down by the sea as far as possible before joining the main highway because apparently it is a hot spot for people being pulled over.

About a half hour drive late we arrived at the white sand dunes where we were hustled for parking money. There was the option to hire dune buggies to race over the sand. We opted to walk up one of the sand dunes instead which was hard work but meant we weren’t there with the crowds on the larger dunes behind us. The sunset was beautiful but as soon as the sun was out of sight we raced back to the bike to try and get as far along the journey back before we completely lost daylight. This was unfortunate because the skies on the journey back were stunning shades of red, pink and purple. I wish I had been more confident on the back of the bike so I could have filmed it.

Once we had arrived back at Mui Ne we went in search of dinner. We ended up at a hotel restaurant just up the road from our AirBnB called Pandanus Resort. There was a huge choice of dishes both local and international and I could highly recommend the grilled cheese oysters. It was a peaceful setting and whilst not the cheapest option for food I really enjoyed myself. Then it was back to our room and to bed

There are some really nice places in Mui Ne and I enjoyed myself there greatly. I’m glad we made a stop there but would have liked to have time to stop at the red dunes also. It was just a shame that some of the locals target tourists so aggressively to try and make a buck- I noticed it more here than other places in the country.

Have you been to Mui Ne before? What were your favourite activities there?